Welcome to Astolat Castle
It took 13 years for Diehl, a celebrated miniature artist, to build the dollhouse, which has an appraised worth of $8.5 million. That works out to about $288,000 per square foot—a number that could make the luxurious apartments at the Time Warner Center, which can run about $5,000 per square foot, feel like servants’ quarters. Literary Beginnings
The dollhouse takes its name after the castle in The Lady of Shallot, a 19th-century ballad by Alfred Lord Tennyson. The Grand Entrance
Is that a fountain we spy out front? Why yes, it is. And some amazing topiary flanking the front door, which leads into a grand entrance hall. All the Trappings
Suits of armor abound, which is a neat feature and the secret to the castle’s overall worth. The dollhouse’s lofty appraisal is based on its valuation as a work of art and on the price tags associated with the thousands of tiny objects collected therein. A silver flatware set, for instance, is said to be worth $5,000. Luxurious Finishes
Here, with the hinges open, you can see the detail involved. As with any stately home, there are finishes like real parquet floors, marble bathrooms, and gilt trim—giving the sense that the castle was inhabited by a Victorian dame married to a medieval warlord. The Salon
Some of the finer touches include hand-stitched tapestries, vases in real lapis lazuli, and replica 18th-century oil paintings—such as the postage-size reproduction of Thomas Lawrence’s Pinkie, displayed on the wall of the salon shown here. Come have a cocktail and sit for a spell. The Library
The library contains tiny books with tiny letters that can be read under a magnifying glass. The book collection includes a bible considered one of the world’s smallest. A drop-leaf secretary bookshelf is valued at up to $2,500; a miniature Hebrew Torah was worth up to $2,500 at the time of purchase. Moving Day
The castle was shipped to the Time Warner Center in 66 boxes and took more than 20 hours to assemble. It stands 9 feet tall and weighs more than 800 pounds. Because it spent its life indoors, the copper roofs haven’t developed a green patina. 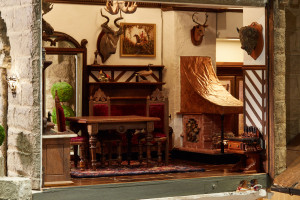 The World’s Smallest Hunter
Tiny taxidermy. That is all. Care For a Tipple?
The bottles in the castle’s bar contain real liquor. We spy Jameson, Bailey’s, and Gordon’s Gin, not to mention some wine of an undisclosed vintage. Anybody for a drop? A Visual Feast
The food, on the other hand, is probably made of polymer resin, said curator Dorothy Twining Globus—recalling Beatrix Potter’s The Tale of Two Bad Mice, about two rodents who trash a dollhouse after discovering that the food on the dining room table is made of plaster. Functional, Practical
The dumbwaiter is said to be in working order. (Not) Child’s Play
The first dollhouses date back to the 17th century, according to Twining Globus, when they were seen not as child’s toys but displays of fine craftsmanship acquired by wealthy families in Holland, Germany, and England. Hallway
Dollhouses were mass produced beginning in the 19th century, said Twining Globus, and soon became a children’s staple. Today, Toys R Us sells dollhouses for as little as $29.99 and as much as $329.99. Fortune Before Fame
The world’s most famous dollhouse was built in 1924 for Queen Mary by the architect Edwin Lutyens and has been displayed at Windsor Castle in Berkshire, England. Although with “The World’s Most Expensive” title, Astolat Castle is nipping at its heels. A Decorator’s Dream
The owners of Astolat Castle have a collection of 30,000 items that can rotate through the house on an ongoing basis. In the Bedroom
“Most dollhouses are never finished,” Twining Globus said. Toiletries
The bathroom is stocked with a hand towel and actual, usable toilet paper (for a very tiny bum). The Opium Den
Thanks to the chinoiserie wall hanging and plush low-slung bed, this room is known as the Opium Den. The Armory
A weaponry room, for fighting minor wars. Castle for a Cause
After the current exhibition ends, the owners hope to tour the dollhouse to other locations to raise money for children’s charities. The Dovecote
Here, a shelter for domesticated pigeons. Meet the Wizard
The lone doll occupying Astolat is a wizard perched in a castle spire—Merlin, we presume. To Scale
Curator Dorothy Twining Globus standing next to the 9-foot-tall castle, which has an exterior wall opened on its hinges.